You are here: Home › Washington Bankruptcy › Did The US Supreme Court Just End Your Ability To Wipe Out Your Second Mortgage In Bankruptcy?
No. What the Supreme Court did in its ruling announced on June first, 2015 was to clarify that you can wipe out your second mortgage by filing a chapter 13 bankruptcy case on your primary home, or the “20 part” of your 80/20 mortgage, or your Home Equity Line of Credit (HELOC). You cannot file a Chapter 7 case to get rid of any of the debts mentioned above. The case that the Supreme Court ruled on, Bank of America v. Caulkett, was a Chapter 7 filing.

Q: When can you wipe out a second mortgage?

A: If the amount that you owe on the first mortgage is greater than the market value of the house, then you can file a Chapter 13 house and “strip off” the second mortgage. In fact, if you owe large balances in delinquent property taxes and you are delinquent on your first mortgage, you can use these delinquencies in combination to “boost” your chances of wiping out a second mortgage in a Chapter 13 case. 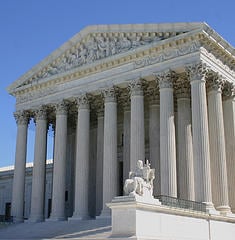 Photo courtesy of dbking.See more of David’s work at https://www.flickr.com/photos/bootbearwdc/

Q: Could you give us an example of a situation where a lien strip might be allowed in a Chapter 13 case?

A: What follows is an example that illustrates how delinquent Homeowners’ Association dues and delinquent property taxes “boost” your chances to succeed in a Chapter 13 lien strip of your second mortgage that wipes out the second mortgage forever:

As we said, the value of the home according to a certified appraiser is $210,000. However, the tax assessed value according to the county is $240,000.

After considering the facts, the judge in Jack and Diane’s chapter 13 bankruptcy case allowed the stripping and non-payment of the second mortgage balance of $40,000 because the appraised value of the home is less than the debts owed against the home that are superior to the second mortgage. The judge correctly found that it is irrelevant that the county tax assessed value of the home is $240,000. In such a case, the judge will say “So what?” that the county thinks the house is worth $240,000 – what matters here for a lien strip is the opinion of the certified appraiser hired by the Chapter 13 debtor about the value of the home.

A: You bet! Once the appraiser renders their professional opinion against the position of the second mortgage holder, then the second mortgage holder usually settles quickly or gives up. Sometimes a credit union lender will try to run the clock out a bit and frustrate you, but in the end they usually settle as well. Most of the big commercial lenders use better sense than a credit union and reach a settlement or give in.

Q: Can I file a Chapter 13 to get rid of my second mortgage even if I have recently had a Chapter 7 case?

A: For now, yes. Most of our local judges have ruled that back to back cases–a chapter 13 following a recently filed Chapter 7–are permissible. This might change, though. We will have to see what the future brings in these cases.

A: No. Some people who file chapter 13 bankruptcy pay back one percent or even less of their credit cards, car repossession balance, and medical bills in their chapter 13 case. The remaining unpaid balance is discharged forever in chapter 13.

Q: Will my monthly payments in a 36 – 60 month Chapter 13 plan be large, and force me to pay back a big percentage of my debt?

Q: I already just recently completed a Chapter 13. Am I excluded from filing a new Chapter 13 to get rid of my second mortgage?