You are here: Home › Washington Bankruptcy › Bankruptcy in the United States: A Brief History

For most of the first 100 years after the adoption of the U.S. Constitution, bankruptcy was primarily a creditor’s remedy to the extent that it was available at all. Following the punitive English model, it was generally deemed an “equitable” remedy, even though the Constitution authorized the creation of bankruptcy statutes. Equitable remedies are judicial remedies developed by courts of equity from about the time of Henry VII to provide more flexible responses to changing social conditions than was possible in precedent-based common law.

In England as well as in most of pre-20th Century America, bankruptcy was a forced repayment plan. Bankruptcy was a state of financial affairs that creditors forced you into involuntarily; you had no choice in the matter. Bankruptcy was not voluntarily initiated by you in order to free yourself of burdensome debt as it is today. You were placed under supervision and forced to repay portions or all of your debts over many years.

The Irish Model for Bankruptcy

Until quite recently, Ireland followed this same old English model, and bankruptcies were extremely rare in Ireland. While England has significantly liberalized its bankruptcy system to something closer to the more generous 20th Century American model, Ireland kept its Victorian era approach until recently. Under the pre-reform Irish model, your creditors had to vote or agree to let you out of bankruptcy repayment when they thought you had repaid enough. I described the pre-reform Irish bankruptcy system here, and in further detail here. The Irish system is undergoing reforms largely as a result of the massive property and economic downturn in this decade. 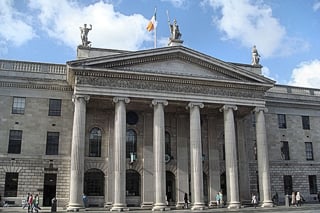 The General Post Office in Dublin, a symbol of Ireland’s independence.

A Different Approach to Bankruptcy in the New World

Article I, Section 8 of the Constitution granted the US Congress the power to “Establish … uniform Laws on the subject of Bankruptcies throughout the United States.” This power was infrequently exercised, however. In the early years of the United States, bankruptcy relief was limited to merchants, and was a stick, rather than a carrot. Initiation of bankruptcy proceedings was limited to creditors and only involuntary bankruptcy proceedings were allowed. Furthermore, creditors could only force commercial debtors into bankruptcy, and the proceedings were involuntarily. Proceedings for individual consumers were not allowed in general. As was the case for commercial debtors, voluntary bankruptcy petitions for individuals were not allowed.

Unfortunately, for those who might have petitioned for bankruptcy at the time, the Bankruptcy Act of 1841 was short lived. It was repealed in 1843. In 1867, laws were passed that allowed voluntary petition for bankruptcy to be filed. Historically, not much is made of the 1867 changes. The next important, groundbreaking change to bankruptcy law occurred in 1898.

The Nelson Act is sometimes referred to as the Bankruptcy Act of 1898. This law survived for almost 80 years, with some amendments.

After this 80 year span, Congress passed the Bankruptcy Reform Act of 1978. The revision to the law in 1978 was a very far reaching overhaul of bankruptcy. The system we have today is still largely based upon the 1978 framework.

Items that continue today from the 1978 Act are the four principal bankruptcy chapters: chapter 7, chapter 11, chapter 12 and chapter 13.

The Bankruptcy Reform Act of 1994

Bankruptcy laws were streamlined and clarified by the passed of the Bankruptcy Reform Act of 1994. This revision to bankruptcy law helped to clarify the requirements for both individual consumer bankruptcies as well as for business bankruptcies. Most bankruptcy law practitioners agree that following the 1994 Act, bankruptcy worked fairly well with relatively clear rules and standards.

The Bankruptcy Abuse Prevention and Consumer Protection Act of 2005

In 2005, Congress developed another reform. This reform was controversial, and had been advocated for beginning in 1996. On October 17, 2005, the Bankruptcy Abuse Prevention and Consumer Protection Act of 2005 came into being. One knowledgeable Judge wrote of the 2005 law: “Those responsible for the passing of the Act did all in their power to avoid the proffered input from sitting United States Bankruptcy Judges, various professors of bankruptcy law at distinguished universities, and many professional associations filled with the best of the bankruptcy lawyers in the country as to the perceived flaws in the Act. This is because the parties pushing the passage of the Act had their own agenda. It was apparently an agenda to make more money off the backs of the consumers in this country. It is not surprising, therefore, that the Act has been highly criticized across the country. In this writer’s opinion, to call the Act a ‘consumer protection’ Act is the grossest of misnomers.” These comments were made by Judge Frank R. Monroe as cited in In re Sosa, 336 B.R. 113 (Bankr. W.D. Tex. 2005) in “Chapter 11 for Individual Debtors: A Collier Monograph”, by Daniel M. Press and Brett Weiss.

How bad is the 2005 Act for consumers? Well, nearly 9 years on, we find that perhaps it is not so bad after all, and as a result, the bankruptcy remedy is available to all consumers who want to file for bankruptcy.

The 2005 Act establishes income tests that look at income over the past six months leading up to bankruptcy. However, many people still find a way to qualify, even if their income is higher.

Problem: Don’t qualify for Chapter 7 under the 2005 Act tests?

Solution: One option can be as easy as ceasing overtime or quitting your job and then filing bankruptcy a few months later.

Problem: Can’t afford to quit your job to qualify for Chapter 7 under the Chapter 7 income tests because you need the benefits and have to support your family?

Solution: File a Chapter 13 and seek a deviation from the repayment formulas under the 2010 U.S. Supreme Court case, Hamilton v. Laning. These deviations are granted relatively routinely provided there are good reasons why you need to spend less repaying your debts in Chapter 13 while spending more on your household needs.

Problem: Was your Hamilton v. Laning request to pay less under Chapter 13 rejected, and you now required to repay debts according to the income test formula?

Are there only three ways to beat the restrictions of the 2005 Act? Of course not! A qualified bankruptcy law practitioner has even more knowledge about bankruptcy law to get you the relief that you need and deserve.

How Do You Select a Qualified Washington Bankruptcy Lawyer?

Look for a bankruptcy lawyer who is a member of

Also, ask if your bankruptcy practitioner actually attends at least some of the semi-annual ABI and NACBA programs. These programs are attended by bankruptcy attorneys nationwide, are located out of state, and entail expenses for tuition, travel and accommodation. Attorneys who are “triple members” of all three organizations and who actually participate in the events sponsored by ABI and NACBA are usually among the best informed and most conscientious bankruptcy lawyers you will find in the marketplace.

I am a member of all three organizations. In doing so, I am one of the few South Puget Sound bankruptcy practitioners who makes the necessary sacrifices and investments in time, expense, and study. In addition to attending the seminars sponsored by the ABI and NACBA, I also participate in the Northwest Bankruptcy Institute educational presentations.

You or someone you know may want to turn over a new leaf, and get started towards a brighter financial future now. Call us at (253) 383-1001, or contact us through the form on our web site, in order to schedule a free, no obligation, personal consultation with me. During our meeting, I will listen to your situation, examine your options with you, and explain how and why bankruptcy may be the right choice for you. Don’t wait; stop procrastinating! Act now to regain your peace of mind right away.

Bankruptcy in the United States: A Brief History
For most of the first 100 years after the adoption of the U.S. Constitution, bankruptcy was primarily a creditor’s remedy to the extent that it was available at all. Following the punitive English model, it was generally deemed an “equitable” remedy, even though the Constitution authorized the creation of bankruptcy statutes. Equitable remedies are judicial remedies developed by courts of equity from about the time of Henry VII to provide more flexible responses to changing social conditions than was possible in precedent-based common law. Today, bankruptcy protection is available to every American citizen. However, your choice of attorney can make a big difference in the outcome of your bankruptcy case.
James H. MaGee